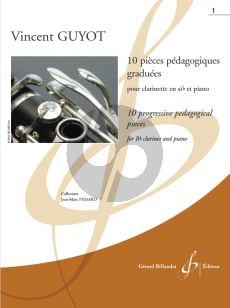 These pieces were originally intended as test pieces in music schools in and around Paris. Their number grew over the years and the collection now fills two volumes. Revised and listed in increasing order of difficulty, they target first and second-cycle proficiency levels.
The author is a former student of Henri Guisgand, Jacques Millon and Henri Druart. His tonal-oriented compositional approach, linking tonality and form, aims at providing young students with the trusted framework of a familiar harmonic context. Hence the deliberate ‘classical’ style, with all the nuances involved.
The piano part is (often) rather difficult and requires a skilled musician and experienced accompanist, capable of moving in and out from background to foreground, bringing out the counterpoint and highlighting modulations, as the case may be.