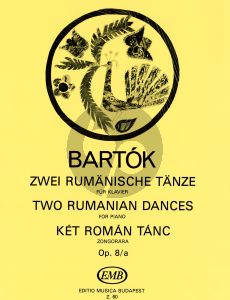 'Bartók wrote the first dance around the time of the Romanian movements of the 'Seven Sketches', after his first trip collecting Romanian folk music in July-August 1909. The second dance is the fruit of March the following year, and it was only after some time he decided they should be published as a pair. From the beginning, audiences were impressed by the first dance, in the composer's peculiar performance, with its initial drumming, and its driving rhythms. If less popular, compositionally the second dance is more original. He parades and varies his material in a chain form, and this too is reminiscent of the dances heard in the playing of Romanian Transylvanian village musicians, which in his scholarly work Bartók called 'motive dances.'