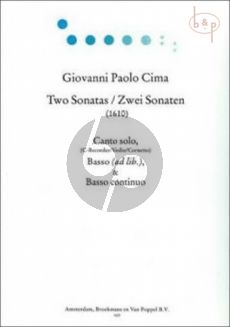 For high instrument, bass instrument and continuo. These are not only the earliest sonatas of their kind, but they are among the finest. The musical interest is harmonic and melodic, rather than just in figuration.

Cima was a Milanese composer of the early Baroque who, along with Castello, Fontana and others, was among the first to explore the new genre of the sonata. These two works come from Cima’s collection of 1610, Concerti Ecclesiastici, which features a mixture of vocal and instrumental pieces. The first of these sonatas was marked originally for cornetto and trombone or violin and violone, while the second was marked for violin
and violone. However, the writing does not preclude other instruments, including recorder. Thiemo Wind marks the obbligato bass part as optional since, in the style of the time, it is frequently doubled by the continuo. While the music is playable in this fashion, there are many
places where the upper voice has several bars of rest, and it would be ideal for the bass to have a more soloistic character in these spots. Cima’s writing is dramatic and colorful although he rather unusually stays in duple time throughout both sonatas. The level of difficulty is about
that of Frescobaldi’s Canzonas, without the virtuosic flourishes of Castello or Fontana.

However, there are certainly enough extended sixteenth-note passages to sink one’s teeth into, as well as some passages in quick alternation between the parts. Wind’s historical background notes (including a detailed critical report) are helpful, but there is little advice concerning performance practice. The continuo realizations are a little more melodic than usual, but this will be a benefit in the absence of a separate bass instrument.
There is no separate continuo bass part, but presumably any available melodic instrument would play from the obbligato bass part. The parts are helpfully set up to avoid page turns. Those who have enjoyed Frescobaldi’s writing in this genre will certainly want to explore these
sonatas of Cima.