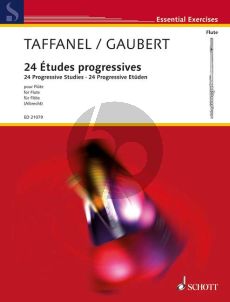 Taffanel's flute playing, his merits for the flute music and his educational work are legendary. Among his pupils were the greatest French flautists, such as Fleury, Barrère, Moyse and Philippe Gaubert. The authoritative textbook of the French flute method, Méthode complète de flûte, was created by Taffanel in collaboration with Gaubert, his favourite pupil and later successor at the Conservatoire. It was finished and published by Gaubert after Taffanel's death.

These 24 progressive studies from the Méthode complète de flûte have now been made available outside the method for the first time, covering all major technical aspects of flute playing and thus being ideal for advanced pupils, students and ambitious music lovers. 36 pages.