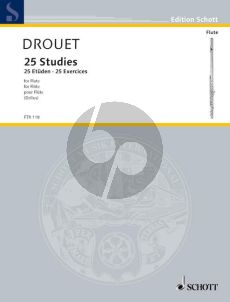 In 1827 B. Schott's Söhne published Louis Drouet's Méthode pour la Flûte (Flötenschule) ou Traité complet et raisonné.... At that time Drouet (1792-1873) was regarded as the most brilliant flautist (James). He was marvelled at as a child prodigy, enjoyed the patronage of Napoleon, and was held in high esteem by Mendelssohn. His travels as a flute virtuoso led him throughout Europe and also to America.Drouet wrote numerous works for the flute, a collection of studies, and the above-mentioned flute method, the fourth part of which - Exercices de tous genres - was intended to establish and develop good tone, fingering and articulation. R.S. Rockstro describes Drouet's exercises as the best that have ever been written for the flute, and this will perhaps explain the designation of these 25 studies from the fourth part of the method as famous. Although they were not written for the Boehm flute, they provide technical exercises in all the areas which the flautist must learn to master in order to be able to play music of both the pre-Classical and the Classical-Romantic periods. Traditional technical exercises are presented in a logical way and yet in a manner which not only requires but even stimulates fluent execution.