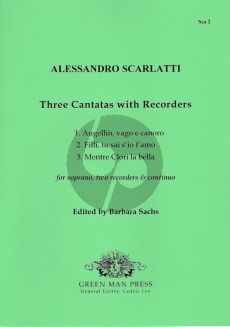 Augellin, vago e canoro, in D minor, has three da capo arias, all in triple metres, separated by recits. The recorders introduce or echo the voice in the first aria, and conclude the second aria which is without them, and provide a totally independent accompaniment throughout the last aria. Syncopations make the second and third arias as unpredictable as the vagaries of the little bird.

Filli tu sai ch’io t’amo, in C major, reverses the structure, framing two da capo arias between three very short recits. In the arias the two recorders alternate with the solo voice, playing in very modern trio-style thirds (and in passages labelled unisoni). The singer is graciously insistent while berating Phyllis for not recognizing what it means to love.

Mentre Clori la bella, in C minor, is strikingly without any hint of da capo aria form. It presents a Cloris determined to have no more to do with Fileno, who, however, is listening to this outburst. Her state of mind is not quite so linear, though, and the three-part structure explains her dilemma. The opening recit is mainly by the narrator, the first aria, with recorders echoing the voice and harmonizing the cadences, is sung twice, (warning him to expect nothing more of her), followed by an instrumental ritornello. A long recit and an aria – repeated in its entirety, but without recorders, and followed by an instrumental ritornello – states that she had loved him once, but that after whatever he has done, she can only hope now to be revenged. A short recit expresses some doubt, and the following aria with recorders has no repeat, though its four lines are set twice, promising a retraction of her disdain. In this cantata Neapolitan 6ths underline all the most dramatic words (sospiri; folle t’inganni; temprati i sdegni).