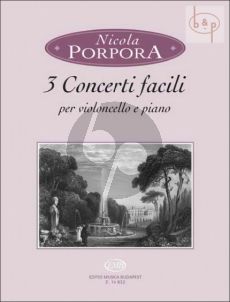 The source of this publication was issued in London in 1745 by John Walsh Jr. Walsh's publication contains six four-movement works, originally written for violin, solo cello, a keyboard instrument and a second cello to reinforce the bass of the latter, but the role of the violin is insignificant, so these works can be regarded as pieces for cello. Of the six works, the arranger of the volume was publishing the three most suitable ones to that as cello concertos; the piano part incorporates both the violin interludes and the continuo. In the cello part higher positions do occur, but they do not necessarily require use of the thumb; they are playable after 4-5 years' intensive study of the instrument.