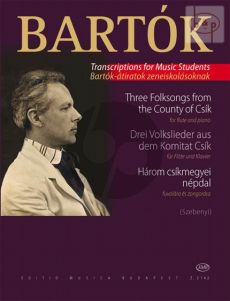 From 1906 on Béla Bartók was collecting folksongs on a regular basis. It was in 1907, during his first collecting trip to Transylvania, that he jotted down those three melodies in Gyergyótekeropatak, Csík, which he both provided with piano accompaniment (From Gyergyó) and arranged for solo piano (Three Hungarian Folksongs from Csík) in the same year. The melodies were played by a 'sixty-year old man' on a peasant flute. In 2015 we are launching a series entitled Bartók Transcriptions for Music Students to mark the 70th anniversary of the composer's death. This involves reissuing our tried publications, and publishing some further, new transcriptions that fulfill in every respect the strict aesthetic demands of the earlier ones. We trust these publications will allow us to introduce still more music students to the realm of one of the great geniuses of 20th-century music.