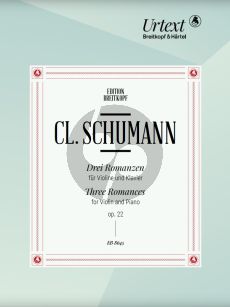 Romances for a young violinist."You can be rightfully pleased with what is coming!" announced Clara Schumann self-confidently in late 1855 to the 24-year-old Joachim upon sending him a copy of the "Three Romances" op. 22 for violin and piano that had just been published by Breitkopf & Härtel. There is no doubt that her acquaintance with the young virtuoso had stimulated her to write the pieces already back in 1853. The two remained linked to the Romances after publication as well: Clara Schumann and Joachim often successfully performed them in their concerts in later years. After having temporarily fallen into oblivion, the Romances did not make their way more lastingly into the chamber music repertoire until 1983, when a reprint of the first edition was published. With the release of this new edition, today's interpreters can also be "rightfully pleased" with Clara Schumann's Opus 22.