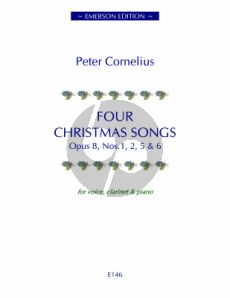 Peter Cornelius is best remembered for his carol The Three Kings, the third of the (originally six) Weinachtslieder (Christmas Songs), which has been omitted from this set but which could profitably be inserted if desired to the give the clarinettist and the audience’s ears a rest. The clarinet obbligatos to these four songs were added in 1979 by Geoffrey Emerson at the request of the clarinettist Howard Rogerson on behalf of the Spohr Trio, which gave the first performance the following year. Peter Cornelius was born in Mainz, Germany on Christmas Eve in 1824, and died there on October 26th 1874. He was the nephew of Peter Cornelius, the painter, and went to Berlin to study music from 1845 to 1850 after abandoning his original idea of becoming an actor. He became very intimate with both Liszt and Wagner, whose music had a great influence on him. His best-known opera is probably The Barber of Baghdad which was produced under Liszt at Weimar in 1858, when due to factional opposition it had only one performance, causing Liszt to resign his post.