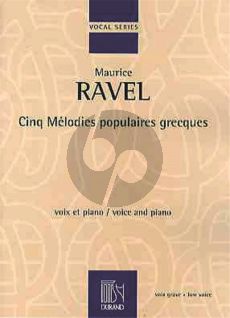 The CINQ MÉLODIES POPULAIRES GRECQUES (Five Greek Folksongs) is an album based on folk roots that were still very much alive at the time of composition. In it, as in the Chansons populaires" (Popular Songs) and the Deux Mélodies hébraïques" (Two Hebrew Melodies) that were composed shortly after, Ravel distances himself from the song in the tradition of Duparc, Chausson and Fauré and creates a new genre in French music, the harmonised folksong, a domain in which Canteloube was also to distinguish himself. Ravel liked to accompany these songs. He often programmed the cycle in his concerts, in particular at events designed to ensure his international fame. In this current edition - transposed to accommodate lower vocal registers - all five songs have been completely re-engraved. A bilingual preface gives the historical framework for this popular song cycle. An English translation is included in the introductory pages.