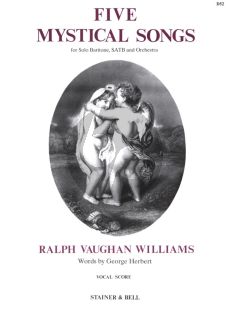 Following the death of Purcell in 1695, English music went into a long period of decline that was not reversed until the late 19th century with the emergence of Elgar, followed by a whole new generation of talented composers. The leading figure of this younger group of musicians was Ralph Vaughan Williams, who for nearly sixty years remained one of the most influential figures in English music, his nine symphonies and succession of major choral works being widely regarded as his greatest achievements.

Like Elgar, Vaughan Williams was a late developer, reaching his mid-thirties before attracting serious attention as a composer. He eventually developed his own unique musical style, which was profoundly influenced by his love of Tudor music and his immensely important work in collecting English folksongs.

In 1908 Vaughan Williams studied with Ravel for a brief three months, and shortly afterwards produced a series of major works, including the song-cycle On Wenlock Edge, the Fantasia on a theme by Thomas Tallis and, in 1911, the Sea Symphony and the Five Mystical Songs, the latter a setting of poems by George Herbert (1593 - 1633). Despite his declared atheism, which in later years mellowed into what his wife Ursula described as 'a cheerful agnosticism', Vaughan Williams was inspired throughout his life by much of the liturgy and music of the Anglican church, the language of the King James Bible, and the visionary qualities of religious verse such as Herbert's.

The baritone soloist is prominent in the first four of the Mystical Songs, with the chorus taking a subsidiary role. In the opening song, the lute and its music are used as a metaphor for the poet's emotions at Easter. The second song features a simple but moving melody for the baritone soloist, who is joined by the chorus for the third verse. In the third song the choir can be heard intoning the ancient plainsong antiphon, O sacrum convivium, whilst the fourth movement, The Call, is for baritone solo. An accompaniment suggestive of pealing bells introduces the triumphant final song of praise, in which the chorus is heard to full effect.