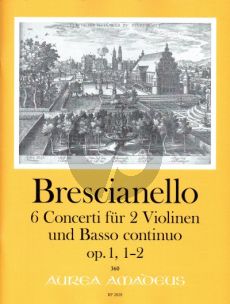 The six Concerti exist as three partbooks, typical of 18th century copyist manuscripts in featuring an almost flawless musical text alongside
a casual placing of signs of articulation, in particular legato slurs and their visible length. The notation of grace notes is unusual: while in the
Concerto primo’s first movement all the little grace notes in the first violin have strokes through their tails – as became the norm only after 1750 –, the second violin in that movement features their baroque notation, without these little strokes; was this done by a different, paid copyist, and if so, when?
Dynamics (for and pia) are relatively frequent in the violin parts, unlike the Basso continuo. In the single bass part we have added corresponding dynamic signs in small print. As in many late baroque Italian works surviving only in manuscript, the bass is unfigured, with merely a few
occurences of Tasto solo.