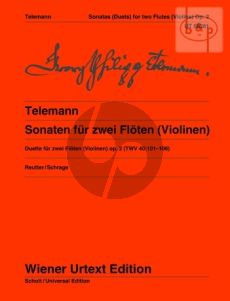 Telemann's Sonatas for two flutes, op. 2 belong, with Quantz' Duets, op. 2 and W.F. Bach's Duets, to the best that the eighteenth-century duet literature has to offer. Telemann's Sonatas for two flutes, op. 2 were so popular in the eighteenth century that pirated editions appeared in Amsterdam, London and Paris. Quantz called Telemann 'ein gründlicher Meister' ('a thorough master') in the composition of duets. The mix of Italian and French styles and the fact that the two parts are equally interesting account for the popularity of these pieces.