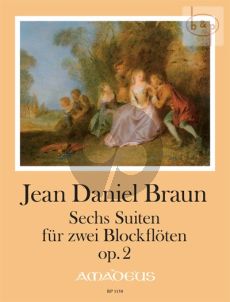 Two-part melody-duets for treble recorders, flutes, oboes or hurdy-gurdies are among the musical genres used in the early 18th century for entertainment, leisure and recreation. Most travelling instrumentalists sought recognition and employment with their own contributions to the genre, apart from the fact that publishers of the period needed plenty of them. The main feature of the present Suites is that they offer the best known pieces and dance movements of the period in their easiest form. The work, printed in score form and in French clef, was published in Paris in 1728. A reprint followed as early as 1729, its title reading: Deuxiéme Oeuvre / de MR. Braun, / Contenant / SIX SUITES / à deux Muzettes, / Qui conviennent aux Vieles, Flutes / à bec, Traversieres, et Haubois. / [Vignette] / Se vend 3t.t 10f. en blanc. / à Paris / Chez / Le S.r Naudot, Le S.r Boivin, Le S.r Le Clerc. Very little is known of Jean Daniel Braun's life and work. He was born ca. 1703. On 24 Febuary 1738 Braun died in Paris. During the first half of the 18th century he was a member of the orchestra of Duke Louis Antoine de Pardaillon de Gondrin (1707-1743) in Épernon, presumably as flutist and bassoonist. Quantz met him in 1726/27 during his stay in Paris. Pieces by Braun can be found in the Danish manuscript Fantasier og Capricier ... alongside Caprices by Quantz (Capricen Fantasias and Beginner's Pieces, Amadeus BP 2050). His published compositions, apart from six sonatas for two bassoons op. 6, are exclusively sonatas for traverse flute with a bass, six each in op.1, 5 and 7. Also extant are 12 trio sonatas op. 3 and op. 8 for two flutes, oboes or violins and Bc., as well as six sonatas for 2 flutes without a bass. All these pieces display a balanced baroque fluency, combined with a French flair.