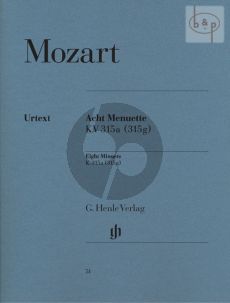 From the late 1760s onwards Mozart repeatedly composed series of dance movements for orchestra. Demand for this occasional music, which really was intended for dancing, increased in the winter months, when the nobility and middle classes frequented balls during the carnival season. Mozart put together his own piano reduction of some of these dance series, as is also the case with the eight Minuets. Only this wonderful autograph version for piano has survived. This single edition was put together using the musical text from the revised complete volume 'Mozart Piano Pieces'.