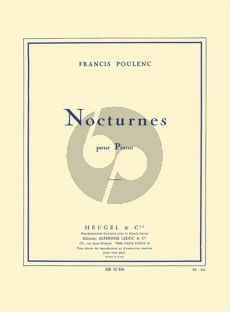 Nocturnes is a set of 8 pieces for piano by Francis Poulenc. Composed between 1929 and 1938 for intermediate players, this set was composed as a cycle and represents night scenes of different events. They can be differentiated from most of the other nocturnes as they are not romantic tone-poems.