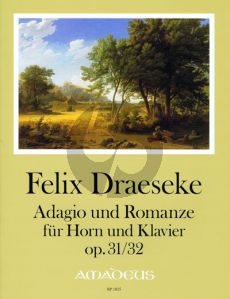 Felix Draeseke, a pastor's son descending from an aristocratic Silesian family, was born in Coburg on 7th October 1835. At 17 he enrolled at the Leipzig Conservatoire. His musical training completed, he went to Weimar, where he made friends with Liszt and his pupils, especially Hans von Bülow. He was an ardent supporter of the New German School, which inspired his first monumental compositions, among them the opera King Sigurd, whose premiere fell through owing to intrigues. His tendency to exuberance displeased the traditionalists, causing him in 1862 to exile himself to Switzerland, where he worked as a piano teacher in Yverdon, Lausanne and Geneva.

This period saw the creation of his first symphonies op. 12 and op. 25, beside didactic works. After what he described in his Memoirs as these lost Swiss years, Draeseke settled permanently in Dresden, where he taught theory at the Conservatoire. The compositions of this period are still worthy of attention: they include the opera Gudrun, the choral work Christus (Mystery in a prologue and 3 oratorios), the Symphonia Tragica op. 40, the piano concerto op. 36, the cantata Columbus, and numerous sacred and secular a-cappella cycles, song ballads and many works for solo piano.

His contribution to chamber music consists of 3 expressive string quartets - which reveal a mastery of counterpoint -, a string quintet (with 2 violoncelli) op. 77, the Quintet op.- 48 for piano, violin, viola, violoncello and horn, two Sonatas for Viola alta and piano, the Violoncello Sonata op. 61 and the Clarinet Sonata op. 38 (Amadeus).

This quarrelsome truth fanatic, whose essay The Confusion of Music addressed the decadence of the period, had to wait a long time for recognition and honours. Having entirely lost his hearing, Felix Draeseke died in Dresden on 26th February 1913. Two melodious and idiomatic gems for the horn appeared during Felix Draeseke's lifetime, both released by the Leipzig publisher Kistner in 1886: the Adagio for horn with Pianoforte accompaniment op. 31, dedicated to the horn player Kammermusikus Oscar Franz, and the Romance for horn with Pianoforte accompaniment op. 32, dedicated to Draeseke's sister Frau Clara Hohnbaum.