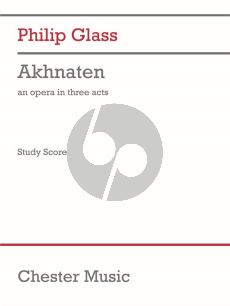 Earn 8,700 Poppels with this product

The third in Glass' trilogy of operas about men who changed the world in which they lived through the power of their ideas, Akhnaten's subject is religion. The Pharaoh Akhnaten was the first monotheist in recorded history, and his substitution of a one-god religion for the multi-god worship in use when he came to power was responsible for his violent overthrow.

The opera describes the rise, reign, and fall of Akhnaten in a series of tableaux. This newly typeset edition is in accord with the vocal score, DU11199, first released in 2017.