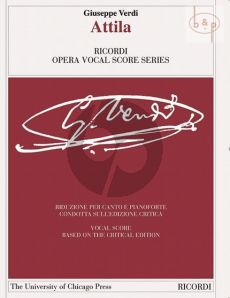 Attila, Verdi's ninth opera and the second of five that he composed for Venice's Teatro La Fenice, had its premiere on 17 March 1846. Verdi was inspired to compose an opera on the subject of Attila by two rather unusual sources, Attila, König der Hunnen, a curious play by a now-forgotten German playwright, Friedrich Ludwig Zacharias Werner, and Madame de Staël's discussion of it in her magisterial work on Germany, De l'Allemagne. This present reduction is based on the critical edition of the full score that - published in 2012 - is the first complete published version of the full orchestral score and the product of the study of numerous manuscript sources: the autograph sources (now kept at the British Library in London, at the Library of Congress in Washington D.C. and at the 'Museo del Teatro alla Scala' in Milan), manuscript sources (those kept at Teatro La Fenice in Venice and at Teatro San Carlo in Naple) and the first piano vocal scores. 364 pages.