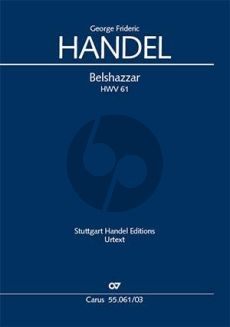 Earn 1,750 Poppels with this product

Belshazzar, with its detailed stage instructions and many short forms such as accompagnato recitatives and ariosi, is the most dramatic of George Frideric Handel’s oratorios. It is de facto a sacred opera, but because of the ban on biblical plots on the stage in England at that time, it had to be composed in the form of an oratorio, i. e. for non-staged performance. For this work Handel chose one of the most enthralling subjects in world and religious history: the fall of Babylon and the liberation of the Jewish people.

The new Carus Urtext edition brings together all three performable versions of the work: the one from the first performance of 1745, as well as the reworkings of 1751 and 1758. For the first time, this edition consistently follows Handel’s conductor’s score, which provides clarity about the numbers which Handel actually performed. Additionally, the edition includes the aria "Lament not thus" which was cut before the first performance. Thus all the choruses and arias composed by Handel for Belshazzar are available together, including the late arias "Wise men" and "Fain would I know" which are hardly known.