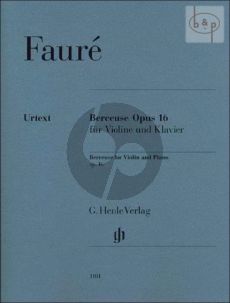 Alongside weighty chamber music works such as piano quartets and violin sonatas, Gabriel Fauré also wrote several charming miniatures for violin and piano. Among these is his Berceuse op. 16 in D major, which fast became one of his best-known pieces following its first performance in 1880; countless arrangements were published. Its melodic subject matter and colourful writing for the piano are reminiscent of Fauré's Violin Sonata No. 1 in A major, which he had composed shortly before. This Urtext edition is the first edition to make use of the autograph sketches of the original version for violin, as well as of the manuscript of Fauré's own orchestration.