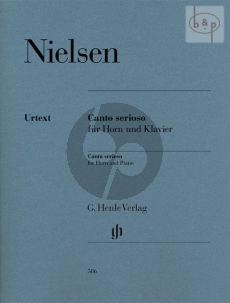 The Dane Carl Nielsen was one of the most original composers at the turn of the 20th century. Based on the German Romantic tradition he developed his own musical language, especially in his symphonies that are still played very frequently. He also, however, often turned to chamber music settings. Canto serioso was originally written as an audition piece for the Copenhagen Opera Orchestra, where the position of low horn player was to be filled. Thus Nielsen's fairly short work makes the most of the low register and the instrument's sonorous mid-range. A welcome addition to the late Romantic repertoire for horn!