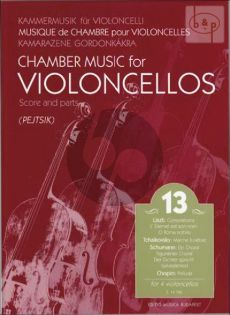 The latest volume in the series contains not too lengthy romantic works arranged for four cellos.In addition to two choral works by Liszt and an orchestral funeral march by Tchaikovsky, well-known piano pieces by Schumann, Chopin and Liszt served as the bases for these arrangements.The four parts differ in their degree of difficulty: the upper ones lie higher, while the lower ones are easier, playable at the level of the top classes in music schools.