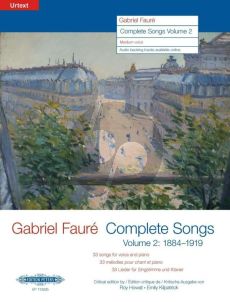 Numbering more than 100 in total, and composed across a 60-year period, Gabriel Fauré’s songs form the single most influential contribution to the field of French art song. Despite their importance, the songs have long been riddled with misprints and inconsistencies. This first complete critical edition is based on study of hundreds of manuscript and printed sources, along with evidence and interpretative advice from artists who worked with Fauré. Above all, it is a practical edition, informed by extensive work with musicians in performances, masterclasses and workshops. This second volume comprises the songs of Fauré’s creative maturity, including popular favourites (Les Roses d’Ispahan, Clair de lune) alongside some lesser-known gems, together with his three vocal duets and the delightful four-voice Madrigal.