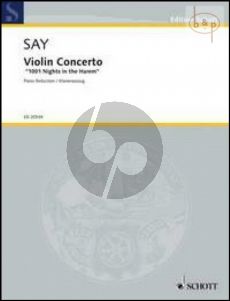 "My Violin Concerto consists of four movements whose inspiration is loosely connected with Scheherazade's One Thousand and One Nights. The first movement is set inside the harem; a variety of women from the harem are introduced, each with her own different personality. The second movement is a frenzy of dance - in effect a party night with an abundance of different types of dance music. The third movement depicts the next morning and consists primarily of variations on a well-known Turkish song. The fourth movement begins dramatically, but develops during the course of the movement more and more into a reminiscence of all the previous events and the work culminates dreamily in a happy mood with sensuous oriental sounds. As appropriate for an oriental soundscape, the orchestra includes a series of Turkish percussion instruments such as a kudüm or bendir, but also glockenspiel, marimba und vibraphone, celesta and harp. It is however the solo violin which tells the story and also accompanies the listener through the entire work. The violin part is highly virtuoso and unites the four movements into an intensely atmospheric whole in which the solo violin soars off into a solo cadenza between each movement, sometimes accompanied by one of the percussion instruments. As is customary, the present piano reduction is initially intended as an aid for the study of this work, but during my tour programmes with Patricia Kopatchinskaja and Burhan Öçal we have utilised this material to create a trio version for violin, piano and percussion." Fazil Say