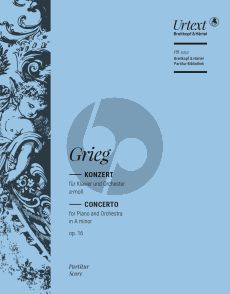 Earn 2,650 Poppels with this product

The piano concerto in a minor stands out in Edvard Grieg’s oeuvre. Besides this famous concerto, he composed only a few other large orchestral works. Because of its popularity even in Grieg’s lifetime, it was often performed, not least by the composer himself. So it is not surprising that Grieg made many changes to the score up to 1907. But at the same time, the concerto’s size, form and substance remained completely unaltered. Interventions in the piano part basically involved subtleties of nuance, and only a very few places in the music text were altered. The situation was different with the orchestration. Here Grieg was keen to experiment and kept filing away at the orchestra sound right up to the last. Melodies were moved to other instruments, accompanying string chords were reconstructed, and above all the list of scored instruments was changed. The main source of the Urtext edition by Ernst-Günter Heinemann is the new edition of the score originally published in 1907 by C. F. Peters, thus several years after the first edition of 1872. Taken into account in the present edition are the changes that Grieg made up to the time of his death.