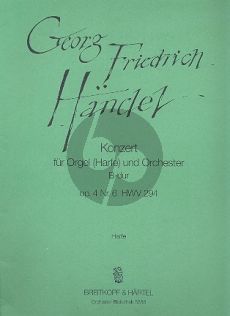 Ton Koopman's new edition of all 16 organ concertos by Handel has drawn to a close. The quality of this edition has been highly praised from all quarters. Source-critical responsibility goes hand in hand with a high level of performance practice when Koopman provides interpretative tips for the ad libitum passages in the organ part without restricting the creativity of the interpreter who is interested in stylistic matters and prefers to work out his own solutions.

The popular "Concerto Op. 4 No. 6 in B flat major" was originally a harp concerto (and is thus called "Concerto per la Harpa" in the autograph) and was performed in this version at its premiere in 1736, when it was inserted into Handel’s oratorio "Alexander’s Feast" in order to illustrate the harp playing of the Greek singer Timotheus. A harp edition is also in preparation.

"I want to make an edition that is not a Koopman interpretation, but contains only that which Handel really wrote. Nevertheless, there are occasional performance suggestions in small print which are elucidated in the Critical Commentary." (Ton Koopman in "Concerto")

Whoever wishes to hear the entire Koopman edition on CD can look forward to the new recording by Christian Schmitt and the Stuttgarter Kammerorchester (Brilliant Classics). This is the first recording for which all 16 new Koopman editions were used as the basis for the performance.