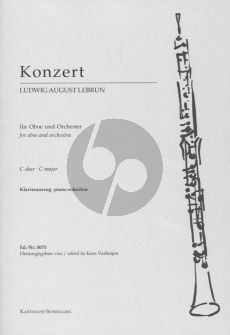 LeBrun wrote six known concerti for oboe (sometimes noted as for flute or oboe), which were first published in the early 19th century. The keys, in order of number are d, g, C, Bb, C, and F. This Concerto in C is NOT one of those six but more than likely an earlier concerto published as "No. 2 Concerto a Flute ou Hautbois."