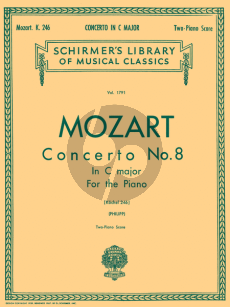 Mozart’s Piano Concerto No.8 In C Major K.246 contains the usual three movements, marked Allegro aperto, Andante, and Rondeau. The fact that there are three cadenzas at varying degrees of difficulty supports the claim that Mozart used this as an educational piece for his pupils. Though it could be said that this is less obviously brilliant than some of Mozart’s other piano concertos, it calls for skilled and nimble finger-work in the outer movements and is still a fantastic masterpiece. This arrangement is for two Pianos, with the second replacing the orchestral arrangements. Note: Two copies are needed to perform this version of the Concerto.