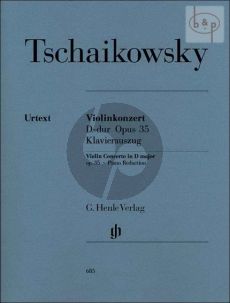 Eduard Hanslick, a much feared critic in his time, was not very complimentary following its première: the violin was no longer being played but rather 'pulled about, torn asunder, beaten black and blue'. Yet he was not able to stop the triumphal march of Tschaikowsky's only violin concerto. Its incredible technical demands have meant that it is a true test of virtuosity. Its effectivenessis, however, mainly due to its great expressiveness - are there any violinists who do not love the lyrical melancholic 'Canzonetta'? - and due to its Slavic temperament. At last and indeed for the first time this milestone in the violinist's repertoire is now available in a text-critical edition, which is true to its original form?