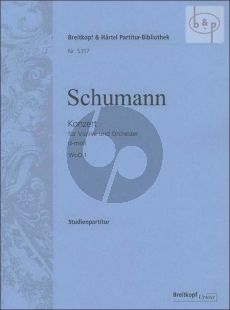 Schumann's last work for solo instrument and orchestra was not given its premiere until 1937, at which time it was also released in an editorially inadequate version. A re-evaluation of Schumann's late oeuvre began in the 1980s, in the wake of which the 'missing link between the concertos of Beethoven and Brahms' (Yehudi Menuhin) also drew increasing attention. Since then, those in the know have come to appreciate the work, whose unique musical and technical demands challenge for both interpreter and listener. This new edition of what is perhaps the most underestimated masterpiece of the Romantic era is the first meticulously prepared Urtext edition of the score. Nothing short of incredible is the fact that the composer's own piano reduction - from which Clara Schumann and Joseph Joachim played the piece - is being published here for the first time! Thomas Zehetmair, who has significantly contributed to the re-assessment of the concerto, assumed the task of providing a sound technical basis to his revision of the solo part.