edited and completed by Gregory Rose 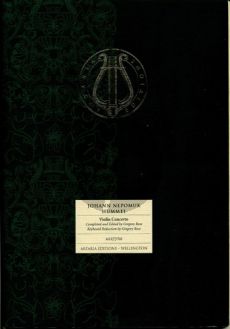 Earn 4,150 Poppels with this product

The score presents us with something of a problem. At first glance, it appears as if the work were never completed although all the violin solo part is extant, in two different hands, Hummel's and that of an ama/nuensis. The sections written out by the amanuensis are in the Allegro - bars 129-152, 186-197, 225-284 - and the Rondo - bars 124-221, 264-334 and 361-413. There is evidence of a change of quill in the Rondo at bar 142 and again at 185. The remainder of the Allegro and Rondo are in Hummel's own hand. The brief Adagio, scored for the soloist and strings alone, is entirely in Hummel's hand. Dr Allan Badley believes that Hummel may have completed the work but abandoned it in the process of revision; this would readily explain why the sections in the hand of the amanuensis lead on occasion into fully scored phases of the work. Be that as it may, the solesurviving source is incomplete and unperformable. There are large sections in the outer movements where the orchestral staves have been left blank; I have added material at these points and composed cadenzas for the first and third movements. In both these movements there are wind and brass parts in the orchestral tuttis only and, indeed, in the Rondo - in bars 50-123 and 264-322 - neither Hummel nor his amanuensis provided staves for winds and brass. I have added these instruments to Hummel's string accompaniment throughout the concerto where I felt this would add colour and variety to the work. In this edition of the work all my additions, both musical and editorial, are marked by square brackets. I have added many accidentals where they are required and a few that I feel are harmonically consistent with Hummel's style. I have had to interpret a few phrases that are almost illegible in the original and I have made a number of small alterations to sections that were not working harmonically. Two bars have been altered in the recapitulation of the Allegro (bars 271-272) to be consistent with the exposition, particularly as these bars in the original violin part do not work at all well. In the Rondo the main theme is played four times and in the second and third statements I have altered one note to be consistent with the other two. I am indebted to the advice and encouragement given to me by Mrs Chris Banks, Curator of Music Manuscripts at The British Library, and her colleague Mr Hugh Cobbe, who gave me permission to complete this concerto. I am very grateful to my wife, Helen Ireland, for her assistance in editing the piano reduction part, and to Jaakko Kuusisto for his excellent ideas for changes in the first movement cadenza. I am also extremely grateful to Dr Allan Badley for his patience during the editing and setting stages of the work, for his many and useful suggestions and for his abiding enthusiasm for the project. The Hummel-Rose Violin Concerto was given its premiere at St John's, Smith Square, London, on 2 June 1998, by Jaakko Kuusisto with the Jupiter Orchestra conducted by Gregory Rose. Performance Suggestions We have added only a very few dynamics to the original passages to maintain consistency between Hummel's solo violin part and the original and added orchestral parts. It is suggested therefore that a few extra dynamics are added in performance to create variety and colour. The string strength should be no larger than 8.8.4.4.2 and works well with an ensemble of 6.6.3.3.1, the probable size of the string section available to Hummel. My cadenzas may, of course, be omitted, shortened or replaced. There is no mention of a cadenza in the original manuscript of the first movement. Hummel's fermatas in the Rondo suggest some kind of improvised Eingang . Gregory Rose