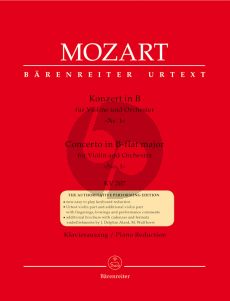 Mozart composed the majority of his works for solo string instruments and orchestra during the years 1773 to 1779. Especially important in this context are the years 1773 and 1775, which witnessed the creation of the five concertos for violin and orchestra as well as several single movements for the same scoring. The reasons for this flourish of activity in this domain lie partly in the fact that Mozart, who still occupied the post of concertmaster to the Prince-Archbishop, was either obliged or inspired to provide such works for special occasions during this long period spent in Salzburg. But another reason was certainly the possibility of experimenting with all the new compositional techniques acquired during his third trip to Italy and his stay of several months in Vienna from July to September 1773.

The piano reduction of Mozart’s G major violin concerto is easier to play, uncluttered and practical with page turns where you need them and where necessary fold-out pages.

The solo part gives players the critical Urtext of the New Mozart Edition. The tutti passages are all presented in normal size print for players wanting to perform these sections with the first violins. An ossia has been included in small print for the last four measures before the first solo passage to allow for the transition to the solo section.

A prepared performance part is also included with bowings, fingerings and performance practice comments. An additional brochure is included with todays most performed cadenzas , ” Eingänge ” and fermata embellishments by Joseph Joachim, Eugène Ysaÿe, Leopold Auer, Sam Franko and Martin Wulfhorst. This collection offers players a spectrum of styles available in no other publication.