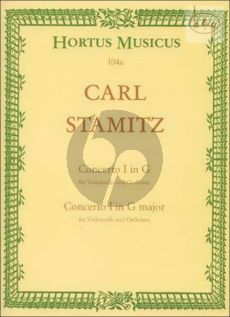 Carl Stamitz (1745-1801), the elder of Johann Stamitz's two musically eminent sons, wrote not only many symphonies and chamber music works, but also six violoncello concertos, three of which were dedicated to the music-loving and violoncello-playing Prussian King Friedrich Wilhelm II. This King, the nephew of King Frederick the Great, was honored by a number of masterpieces dedicated to him by such composers as Mozart and Beethoven, as well as the Prussian court composer Luigi Boccherini. The three concertos written for King Friedrich Wilhelm II of Prussia, like all of Carl Stamitz's other works, are unmistakable products of the 'Mannheim school'. They are notable for their melodiousness and youthful vigor and are a welcome addition to the violoncello literature.