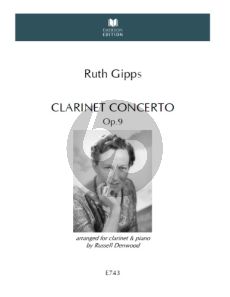 "The Clarinet Concerto Op.9 in G minor was composed in 1940 and marks the presence of two important people in Ruth’s life at that time. The first, her future husband Robert Baker who is the dedicatee and the second, Ralph Vaughan Williams who Ruth was studying with at the Royal College of Music.

The first movement is full of driving energy in contrast with some rather beautiful lyrical moments and the third movement is very reminiscent of a English Jig. It is the middle movement, however, that shows the importance of Robert and Ralph. The duet between oboe and solo clarinet is the blossoming romance between Ruth and Robert, while the tonality and pastoral nature of the movement as a whole is in many ways a homage to Ralph." - Peter Cigleris