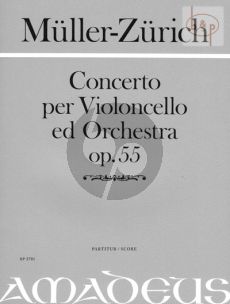 Earn 3,600 Poppels with this product

Paul Müller-Zürich was born in Zurich on 19 June 1898. He studied with Philipp Jarnach and Volkmar Andreae at the Zurich Conservatory, then with Jean Batalla in Paris. In 1927 Paul Müller was appointed to the Zurich Conservatory as a lecturer in music theory, and remained there until 1968. As teacher, conductor and composer he was one of the significant personalities in Swiss musical life in the twentieth century. He was awarded the Music Prize of the city of Zurich in 1953, and in 1958 received the composer prize of the Swiss Musicians' Association, whose president he was from 1960 to 1963. Furthermore, he taught harmony and counterpoint at the university from 1958 to 1969. He also worked with the Swiss Society for Authors' Rights SUISA and the Pro Helvetia. Paul Müller's oeuvre includes almost every genre, from large-scale works for music theatre through concerti, chamber music, choral works and lieder, as well as a great number of sacred and secular organ works. In his early compositions, the late-Romanticism of his teachers can still be detected. Later he developed his own unmistakable tonal expression. Although he retained an open mind regarding the stylistic and technical progress that took place during his lifetime, he maintained a critical distance as a composer. In an interview in the early 1970s, he expressed his artistic credo: 'I believe in tonality, in the triad as the foundation of harmony, and in the seven diatonic and twelve chromatic steps of the scale.' Paul Müller died on 21 July 1993 in Lucerne. His manuscripts now lie in the Zentralbibliothek Zürich. The Concerto per Violoncello ed Orchestra op. 55, written on demand of the Louisville Philharmonic Society and dedicated to the Philharmonic Orchestra Louisville was composed between 21 July to 21 August 1954. The first performance happened on 23 April 1955 in Louisville USA. The soloist was Grace Whitney, the conductor was Robert Whitney. The soloist of the first performance in Europe on 18 October 1955 in Zurich was James Whitehead, the conductor Hans Rosbaud.