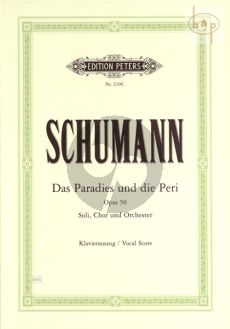 Paradise and the Peri, in German Das Paradies und die Peri, is an oratorio for soloists, chorus, and orchestra by Robert Schumann. Completed in 1843, the work was published as Schumann's Op. 50. The work is based on a German translation (by Schumann and his friend Emil Flechsig) of a tale from Lalla-Rookh by Thomas Moore. The peri, a creature from Persian mythology, is the focus of the story, having been expelled from Paradise and trying to regain entrance by giving the gift that is most dear to heaven. Eventually the peri is admitted after bringing a tear from the cheek of a repentant old sinner who has seen a child praying. Peter Ostwald in his biography Schumann: The Inner Voices of a Musical Genius records that Schumann 'confided to a friend that 'while writing Paradise and the Peri a voice occasionally whispered to me' what you are doing is not done completely in vain,' and that even Richard Wagner praised this work. On the negative side, reports Ostwald, 'The Germans even used the Peri's more warlike interludes to stir up patriotic fervor during World War II'-but of course this propaganda usage by the Nazi regime cannot reasonably be held against Schumann or his work. The cantata is generally held to be a significant achievement by Schumann, and it perhaps appeals less than it might otherwise to modern audiences due to the flowery, Eastern-inspired verbiage of the libretto, which represents a vogue for orientalism that was in full swing in the 19th century but has receded considerably today. The first English performance took place under difficult conditions at the Hanover Square Rooms in London at the invitation of the Philharmonic Society conducted by William Sterndale Bennett with Jenny Lind taking the leading soprano part. Paradise and the Peri was the vehicle for Gabrielle Krauss's first important appearance, in Vienna in 1858, when she was not yet 16 years old.