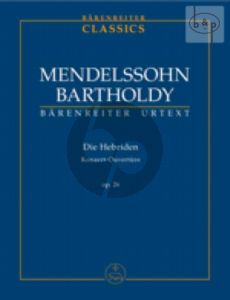 Mendelssohn mentioned this work for the first time in a letter written in Scotland to his family quoting the first 21 bars of this programmatic overture. Over the years it was to receive numerous revisions. Firstly, there were two Rome versions, the first of which Mendelssohn played to Berlioz on the piano. These were followed by two London versions. Bärenreiter's new Urtext study score includes the two London versions, following the scholarly-critical edition of all four versions edited by Christopher Hogwood and published in 2004 (BA 9053).