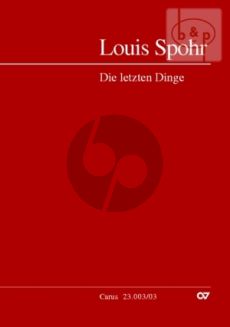 In honor of the 150th anniversary of the death of Louis Spohr, for the first time Carus is publishing a critical edition of The Last Judgment, the most important of his four oratorios. It was first performed on Good Friday, 1826 in Kassel. It is based on the theologically most significant portions of the Revelations of John in the New Testament, whose visions of death and eternity Spohr vividly portrayed in music. The work represents an important enrichment to the repertoire of the oratorio, especially suitable for the end of the church year. It is captivating on account of its masterful instrumentation, excellent use of chromaticism, large-scale solo recitatives and accessible choral passages filled with heartfelt sensitivity on the one hand, and exciting drama on the other. Solo SATB, Coro SATB, 2 Fl, 2 Ob, 2 Clt, 2 Fg, 2 Cor, 2 Tr, 3 Trb, Timp, 2 Vl, Va, Vc, Cb.