Earth Seen From Above SSAATTBB a capella - Meredith Monk

from Atlas an Opera in 3 Parts 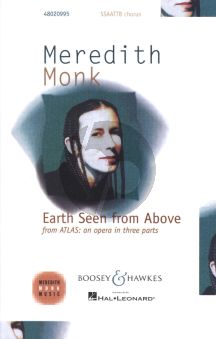 Earn 150 Poppels with this product

Originally composed in 1987 as part of an eight-section a cappella work entitled 'The Ringing Place.' In 1991, five sections were incorporated into Part III: Invisible Light of the opera ATLAS. Consequently, this selection became a suite that has been performed in concert for several years. Although conceived as a work to be performed without a conductor and from memory, Earth Seen from Above may be performed in a conventional choral formation with a conductor and without designated physical gestures when memorization and staging are not possible. Includes detailed performance notes.