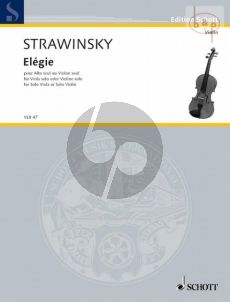 Whilst Stravinsky himself did not know several of the people whom he was commissioned to write memorials for, in this case it seems Stravinsky did have a connection to Onnou, as the Pro Arte Quartet had been involved with performances of his music, though there is evidence to suggest that the work was sketched before the commission by Prévost was received.

Elegy is an unusual work, which is suggested for performance on either violin or viola with transposition up or down by a fifth, and is directed to be performed with the instrument muted throughout, creating a dark and sombre sound-world. The ternary (three-part) form of the piece presents a fugal central section with two interlocking voices, framed at the start and end with a slowly unfolding chant-like and meditative melody, broken into phrases of varying length by breath-like pauses specified between phrases within the music.

Interestingly, this piece was also performed in 1945 and several times later with a dance choreographed by George Balanchine, who attempted in his work ‘to reflect the flow and concentrated variety of the music through the interlaced bodies of two dancers rooted to a central spot on the stage.’ 6 pages.