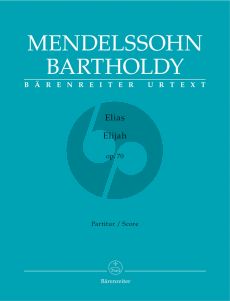 Earn 7,450 Poppels with this product

Immediately after completing “St. Paul” in 1836, Mendelssohn mulled over the idea of composing a further oratorio. However a whole decade elapsed before the composition of “Elijah” which takes as its theme the story of the Biblical prophet from the 1st Book of Kings. When he received the invitation to write a major work for the Birmingham Music Festival, Mendelssohn finally embarked on work on the oratorio. “Elijah” was premiered in 1846 in Birmingham with great success and has enjoyed great popularity ever since.

Following the first performance, Mendelssohn undertook a revision of the oratorio in which whole numbers were removed and new ones substituted. This is the version which was first heard in 1847 in London and which is still performed today.

This Urtext edition of the oratorio edited by the Mendelssohn specialist Douglass Seaton is based on all critical sources. The edition reflects the latest research findings and includes both English and German singing texts.