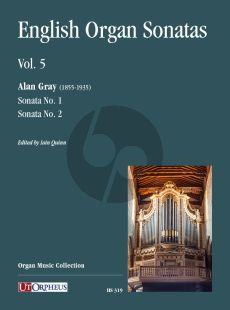 The four organ sonatas of Alan Gray (1855-1935) stand as one of the largest contributions to the sonata repertoire by an English composer. Published around 1890, they also mark an advancement in the repertoire of potential concert works. Gray had not studied abroad and his sonatas demonstrate a compelling emergence of a distinctly English style of organ sonata after almost half a century of continental influence.
All four sonatas show a strong command of not only writing for the instrument but also the art of registration. Gray’s indications are clear, logical, and practical. He writes for a symphonic organ of at least three manuals but many of the pieces could be played on an instrument of only two manuals. The use of contrasting manual colours between phrases and the incorporation of solo stops is notable for conveying Gray’s views on interpretation and his strong understanding of the instrument.