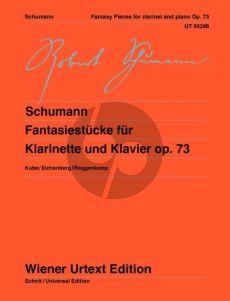 Robert Schumann wrote his Fantasy Pieces for clarinet and piano in the course of two days in February 1849. Only a few days later they were premiered by Clara Schumann and the Dresden clarinetist Johann Gottlieb Kotte. Initially choosing the title Soirée Pieces for his works, Schumann finally decided to have them published as Fantasy Pieces, thereby emphasizing their poetical aspects.