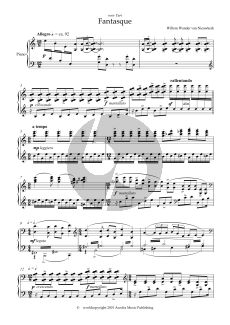 I wrote this piece in the year 2000 for my son Yuri at the request of his then teacher, pianist Ludmila Baslavskaya. Yuri was 13 at the time and had been her pupil for two years. Strange to say, it is my first piece for solo piano. Nevertheless, Yuri from his earliest days on had had to cope with my piano playing (and teaching). He was thus used to the caprice of my daily improvisations and my rhythmic approach to the piano and quickly picked up the gist of this piece - rooted in my preference (as an amateur percussionist) for West-African sub-Sahara rhythmic processes, the songs of the (hi)story-tellers that accompany themselves with the kora, and the horn calls of wind groups. And, of course, there is our shared admiration for that founding father of 20th-century piano playing, Debussy, to whose late work the title is an obvious tribute, and whose late Classicism is an important impetus to my own.