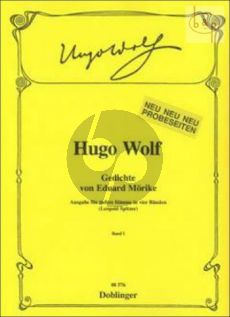 At the time of setting Mörike's (1804-1875) poems, Hugo Wolf had already travelled an arduous and lengthy path of searching and self-finding. The result was the conclusion that it is the poetry alone rather than traditional compositional procedures that defines the form and the musical means of expression. He had stepped out from under the shadow of Schubert and Schumann with the Mörike poems. Thus, he wrote on a sheet of paper: "Schubert, the highest musical potency; triumph of music over poetry. The first truly original landmark for the lied's development since Schumann's appearance. Schumann a musical poet. The poetic foundation appears, but a finished musical form remains; - Wolf Poetry and Music One. - undivided, so much music especially in poetry. No additions, to create everything from the poetic subject." Wolf, it appears, did not see himself in a line with Schubert or Schumann, but rather as a creator of something new. This is indeed also the verdict of music history which names Wolf, especially his "Gedichte von Eduard Mörike", the "creator of the new German lied". Wolf's note also contains the key for interpretation: the point of departure is the poetry and not the music. These two elements have to become one. (from the preface)