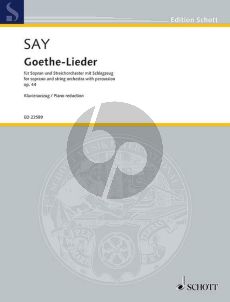 In his set of five lieder with finale, Fazıl Say sets a selection of contrasting poems from Goethe’s cycle West-Eastern Divan in which the poet skilfully intertwines the intellectual Western world with oriental mysticism. Say creates passages of aria and recitative, the latter being characterised by the conventional accompaniment almost devoid of rhythm beneath quasi-improvisational vocal style, where the aria sections are passionate and dramatic. Arabic rhythms and melodies dominate the metrically varied structures of bars in multiples of nine which typify Say’s music. In his settings of the texts Say attaches great importance to comprehensibility, writing vocal lines that consist primarily of syllabic steps and intervalic leaps, with extended melismatic sections written as vocalises. Intermediate to advanced level. 40 pages. Duration: 20 min.