Grease is the Word! (3 Hits) SA and Piano - Jacobs Casey 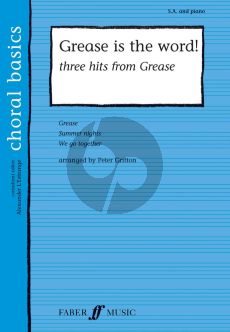 Grease hit the stage in the early 1970s as a rock 'n' roll style to create a punchy drama centred on teenagers coming to terms with the big issues of life. 'Grease' was the opening number for the both the early stage version and the film and was penned by Barry Gibb (of the Bee Gees). 'Summer Nights' is an unusual song as its a duet, but both Danny and Sandy are placed separately for both stage and screen. 'We Go Together' acts as a finale for both the musical and this trio of great Grease songs.

Choral Basics has set new standards in choral publishing. It offers straightforward and rewarding repertoire for beginner choirs of all ages in a dazzling array of styles including world music, spirituals, pop classics, show hits and original pieces. Each piece is carefully considered for the level by consultant editor Alexander L'Estrange and offers simple 2-part arrangements for soprano and alto paying particular attention to breathing, vocal ranges and technique whilst straightforward piano accompaniments support the vocal lines.

The series offers unbeatable value for money, as each volume comprises a set of contrasting songs for easy programming.