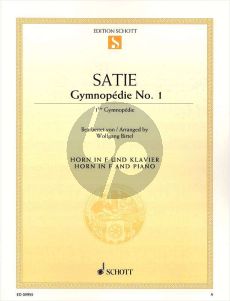 The music scene took notice of Erik Satie all of a sudden: The world premiere of his ballet 'Parade' in 1917 caused quite a scandal. The production divided the music scene of Paris, yet made the composer widely known. Satie who hardly had had any solid musical training developed a new musical style, in deliberate rejection of the 'Wagnérisme' of his time, the perfect example being his '3 Gymnopédies' of 1888 the first of which was here arranged for a solo instrument with piano accompaniment: Thanks to its easy playability, it can also be used for educational purposes.